If you are here, you already know what Apache Ranger is. It is the most popular, if not the only, way to manage security in the Hadoop framework. It has integrations with Active Directory, Kerberos and various others for authentication but I believe the most interesting feature is its authorization support. Being part of the Hadoop ecosystem, one would not be surprised that it has inbuilt support (via plugins) for most frameworks in the Hadoop ecosystem - Hive, HBase, HDFS etc. However, I've found that it's actually very easy to spin your own custom plugin for Ranger.

This post would focus on the simplicity of design in Ranger plugins and showcase how easy it is to build one for ourselves. As an example, we'll build a Ranger plugin for managing access to a simple HTTP service written using Akka HTTP.

The code behind this post is split into two repositories:

To reiterate what we are attempting to do here, we are going to write a REST service and let Ranger manage the authorization for it.

We'll look into these two things in detail. Let's attempt to write the server-side components first.

As an inspiration, if we open up the ranger code base, we can see some of the in-built plugins.

Pictorially, within the Ranger code base, we have bunch of plugins and we would like to add our own plugin.

Zooming in the previous picture, the server-side component on the plugin would mean writing a

So, there's literally "one" configuration and "one" class that you need to implement for the server-side. 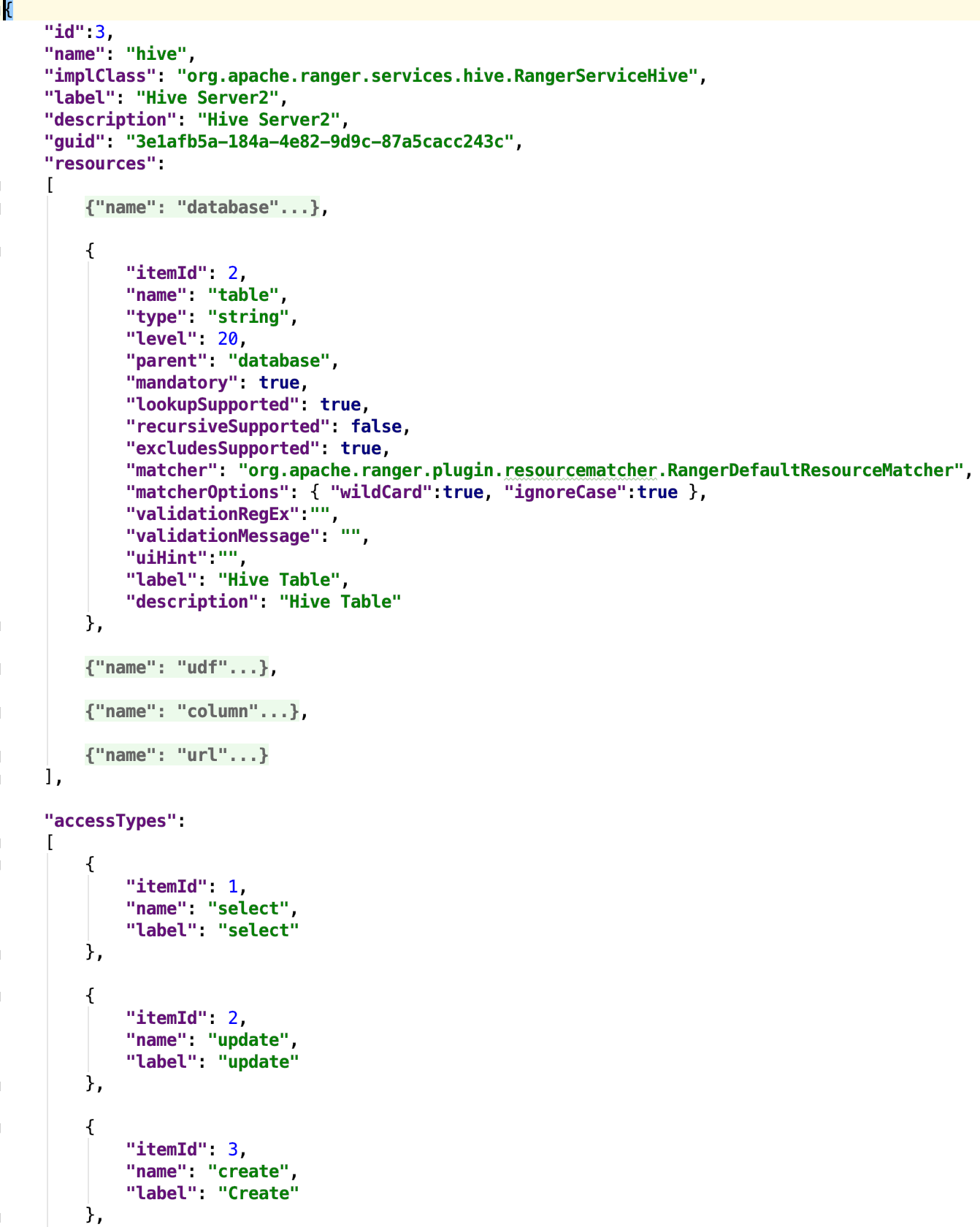 In my opinion, there are three important things that we are talking about here :

We know that Ranger can manage security for several Kakfa topics, HDFS and HBase clusters. Each of these services would be running in a different host and the way to authenticate into each of them would be different. The place to capture this information would be this configs part. For the sake of simplicity of this example, we don't care about authentication for our HTTP service. So, we are just capturing a URL that we could ping to, to ensure that our service is up and running.

2. A class that inherits RangerBaseService

The second and the last part of implementing our server-side component for the ranger plugin is to write a class that inherits the RangerBaseService. 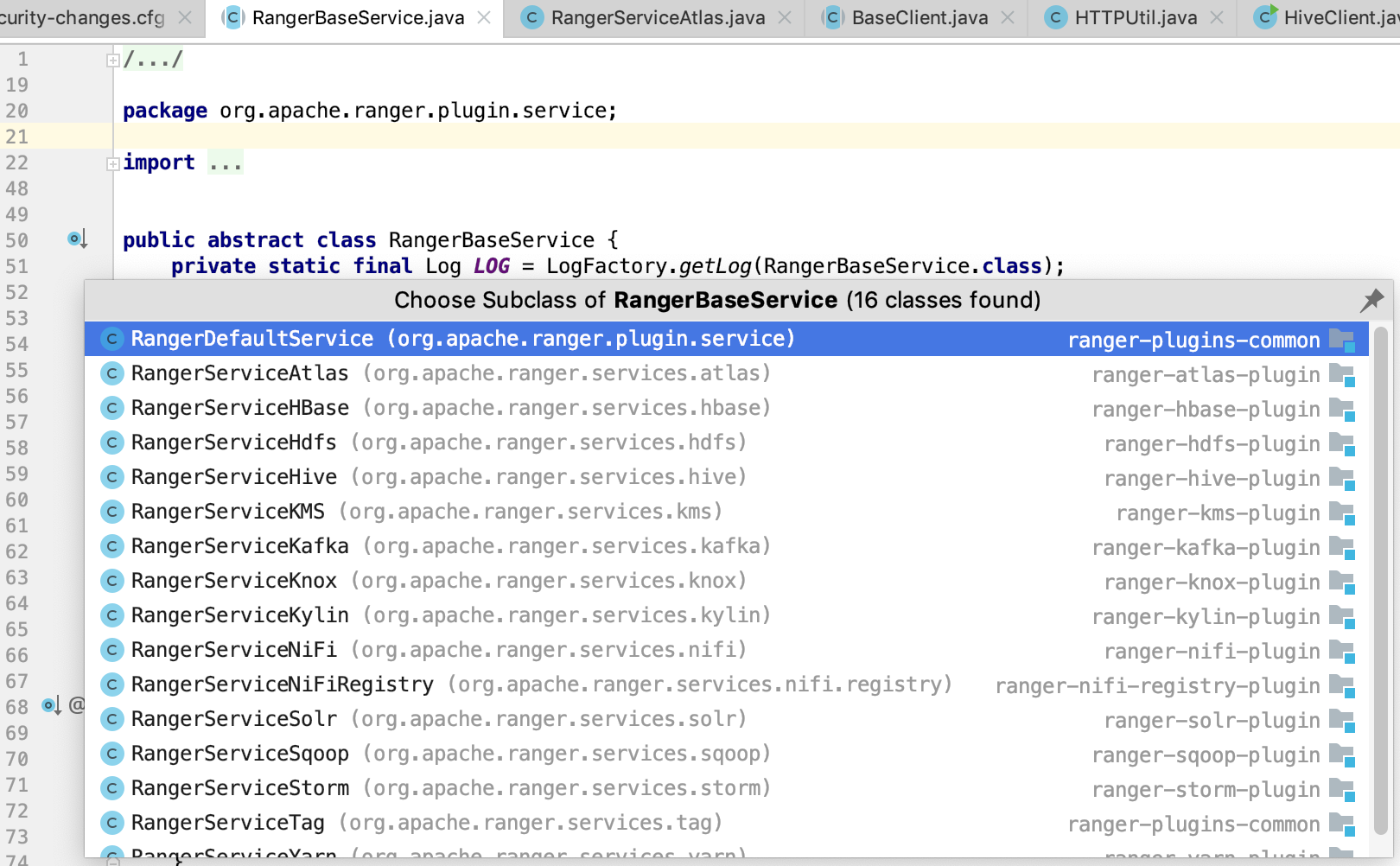 The class expects two functions to be overridden: 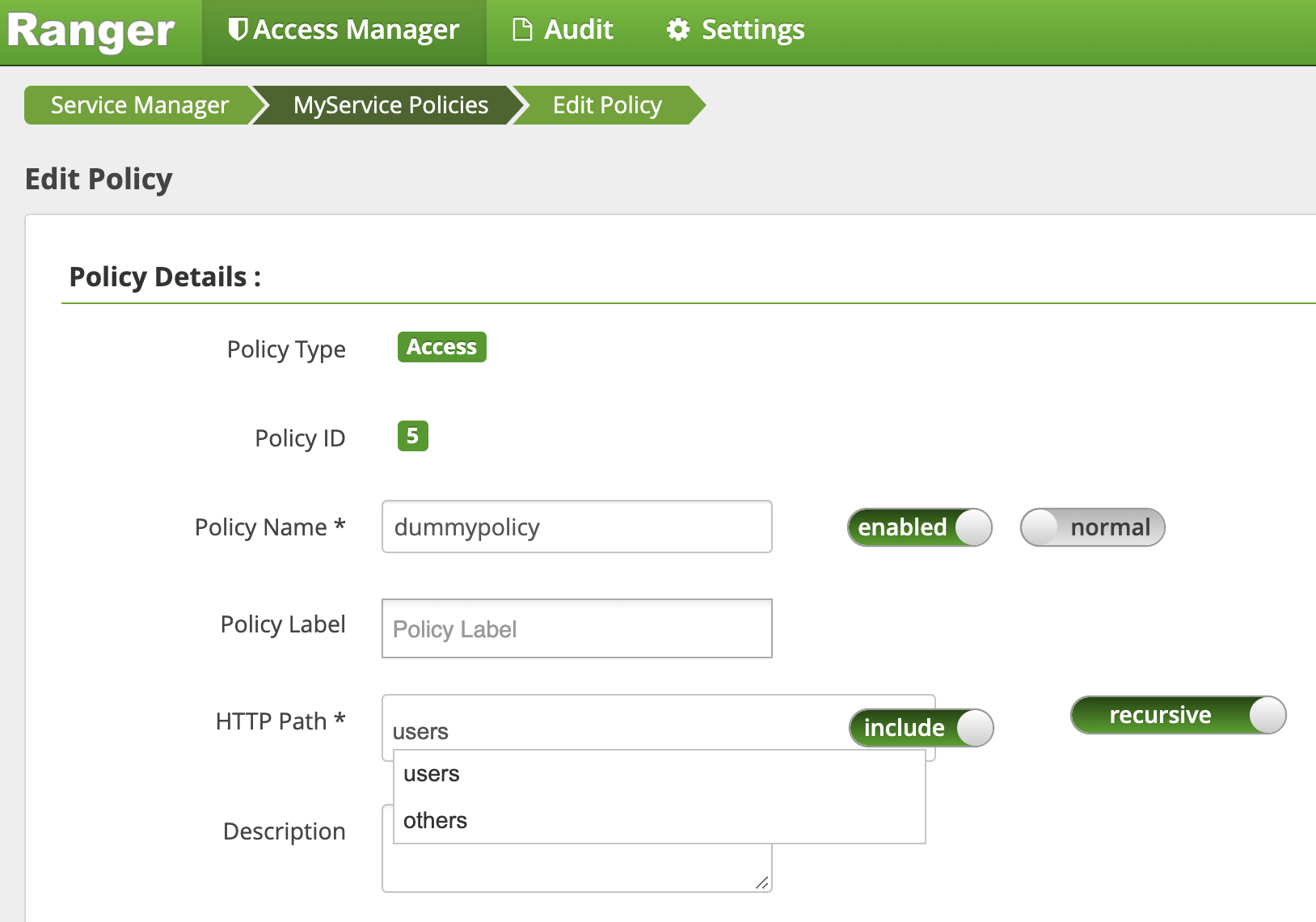 Later, when we configure an access policy, we would be configuring the resources in it. Now, this function is used to lookup and autofill those resources. Say, if we are entering a HDFS resource or Hive table, the number of options are quite a lot and it's easy to do a typo. In case of Hive, this function would connect to the metastore and populate the tables and databases for us.

In the case of HTTP service, remember the service_list_url? That URL would just return a comma separated list of REST resources. For implementing this function, I am just calling the service again and tokenizing the response.

Now, as a final step to the code, we'll need to tie this class RangerServiceHTTP and the servicedef configuration together. The way we do this is by configuring the class in the implClass property. Also notice that we are configuring the name of this ranger plugin as httpservice:

Yaay! We now see HTTPSERVICE on our Ranger UI 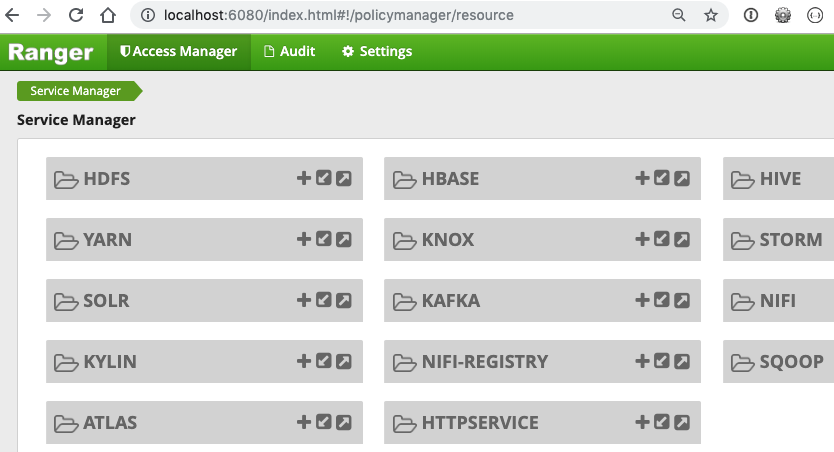 On the application side, things couldn't get any simpler. In order to use the policies used in Ranger, all that an application would need to do is to call Ranger and check if the user has access to a resource. The function is literally called isAccessAllowed. 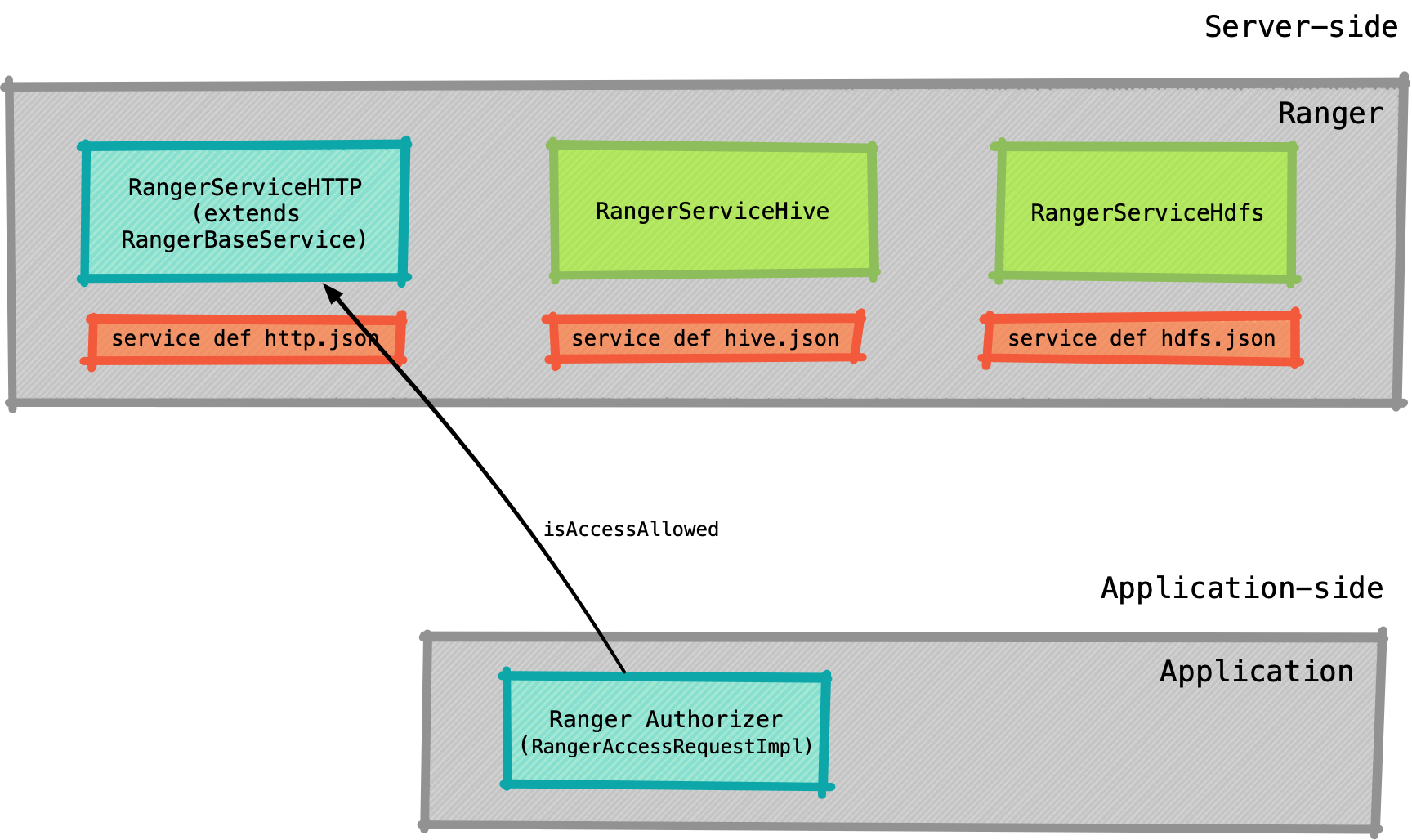 The following code is pretty much all that needs to be written on the application side:

The authorize function is the one that gets called by the interceptor just before the client is given access to a REST resource. The function simply constructs a AccessRequest - the RangerAccessRequestImpl and calls the plugin's isAccessAllowed function, which returns a Boolean.

One last thing that we are required to do is to copy an audit and security xml into our classpath. These are like the site xmls for Ranger. For this exercise, we'll just place the xmls in our resources directory. 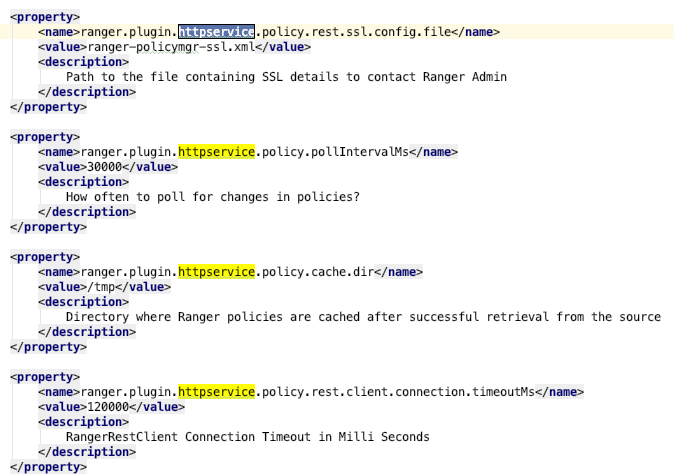 There's also one property that needs special attention. That's the property called ranger.plugin.httpservice.service.name. This property's value must be the same as the Service Name that you use in your Ranger UI. 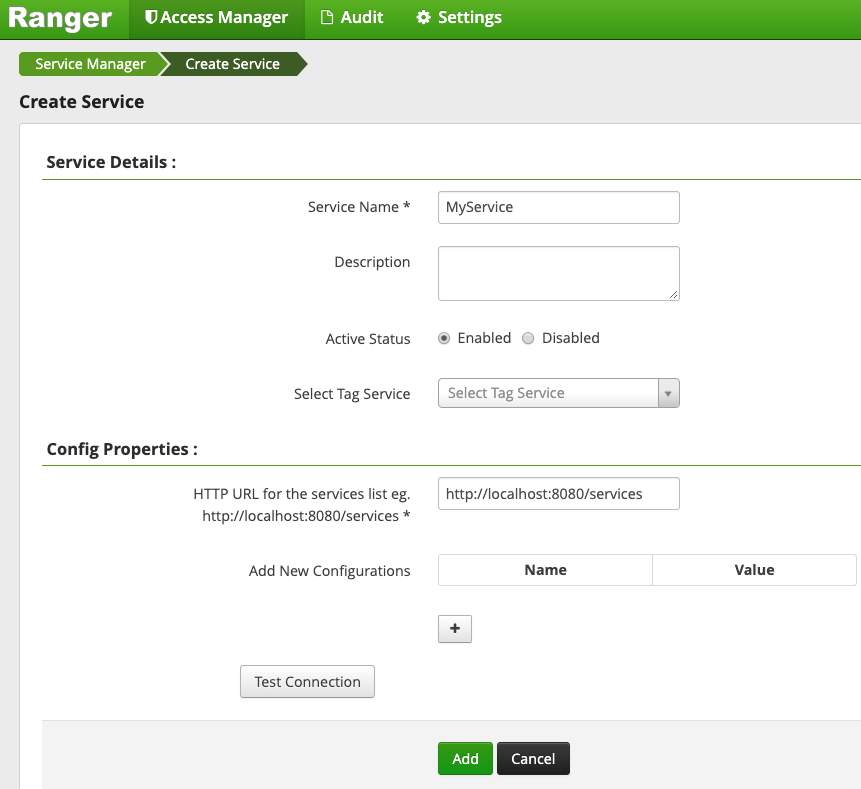 This would involve two steps 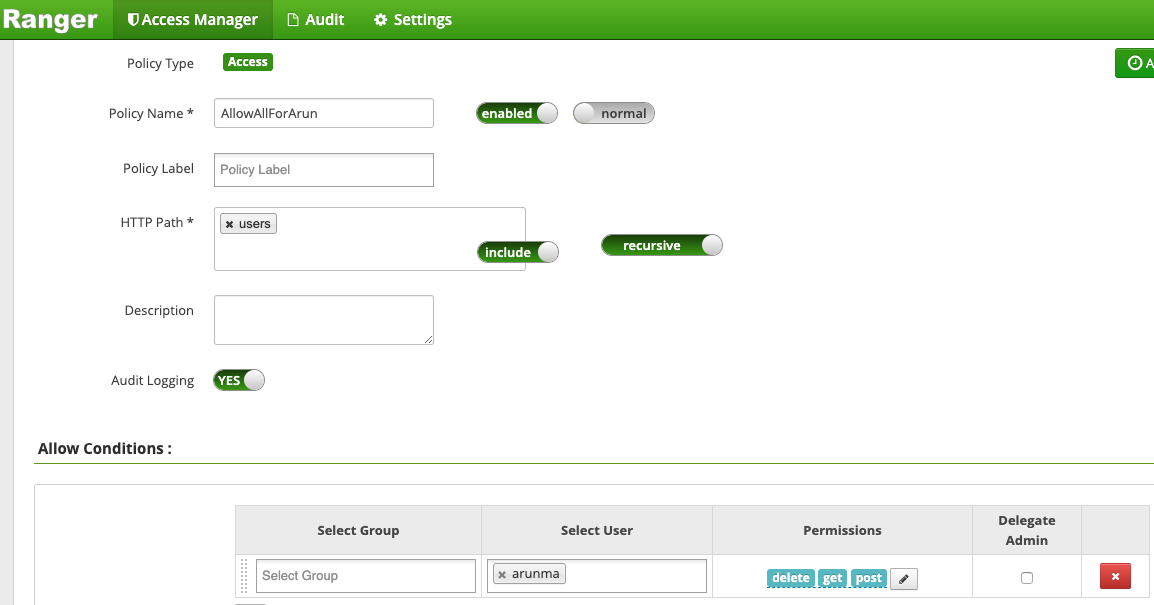 Let's verify the policy by bringing up our HTTP Service - start the com.arunma.RangerManagedHttpServer

You now have a working Ranger authorized HTTP Service.

Thanks for reading. Happy Hacking !

I have been recently playing with Apache Amaterasu [http://amaterasu.incubator.apache.…