In this first part of Actor Messaging, we'll create the Teacher Actor and instead of the Student Actor, we'll use a main program called StudentSimulatorApp.

The picture conveys this :

(if the terms are overwhelming, don't worry, we'll go through them in detail)

Like I said, don't worry about it. Let's look at each step in detail now. You can come back and revisit these five steps once we are done.

We would use this StudentSimulatorApp to bring up the JVM and initialize the ActorSystem. 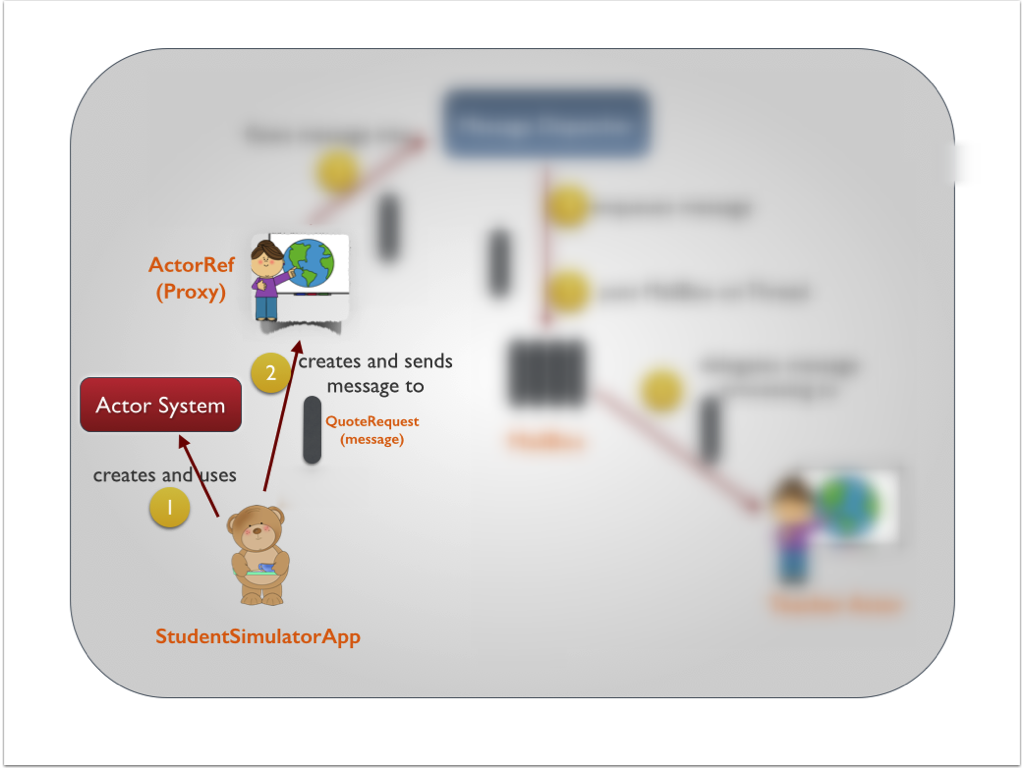 As we understand from the picture, the StudentSimulatorApp

ActorSystem is the entry point into the ActorWorld. ActorSystems are through which you could create and stop Actors. Or even shutdown the entire Actor environment. 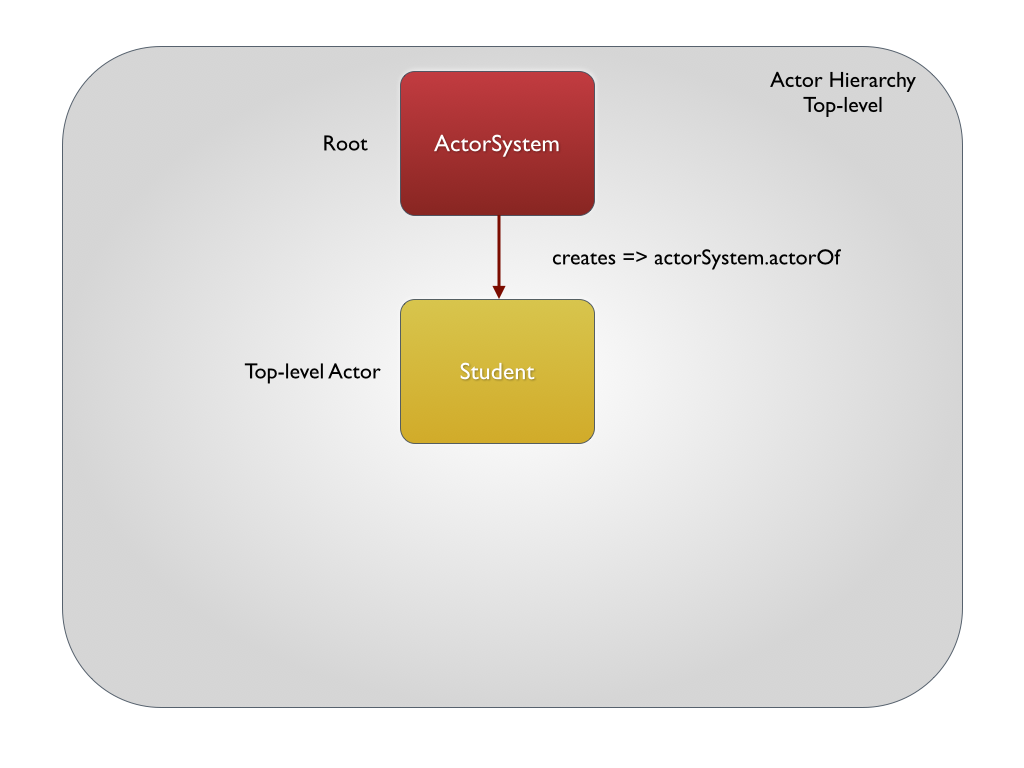 The UniversityMessageSystem is simply a cute name you give to your ActorSystem.

2. Creating a Proxy for TeacherActor?

The actorOf is the Actor creation method in ActorSystem. But, as you can see, it doesn't return a TeacherActor which we need. It returns something of type ActorRef.

The ActorRef acts as a Proxy for the actual Actors. The clients do not talk directly with the Actor. This is Actor Model's way of avoiding direct access to any custom/private methods or variables in the TeacherActor or any Actor for that sake.

To repeat, you send messages only to the ActorRef and it eventually reaches your actual Actor. You can NEVER talk to your Actor directly. People will hate you to death if you find some mean ways to do that. 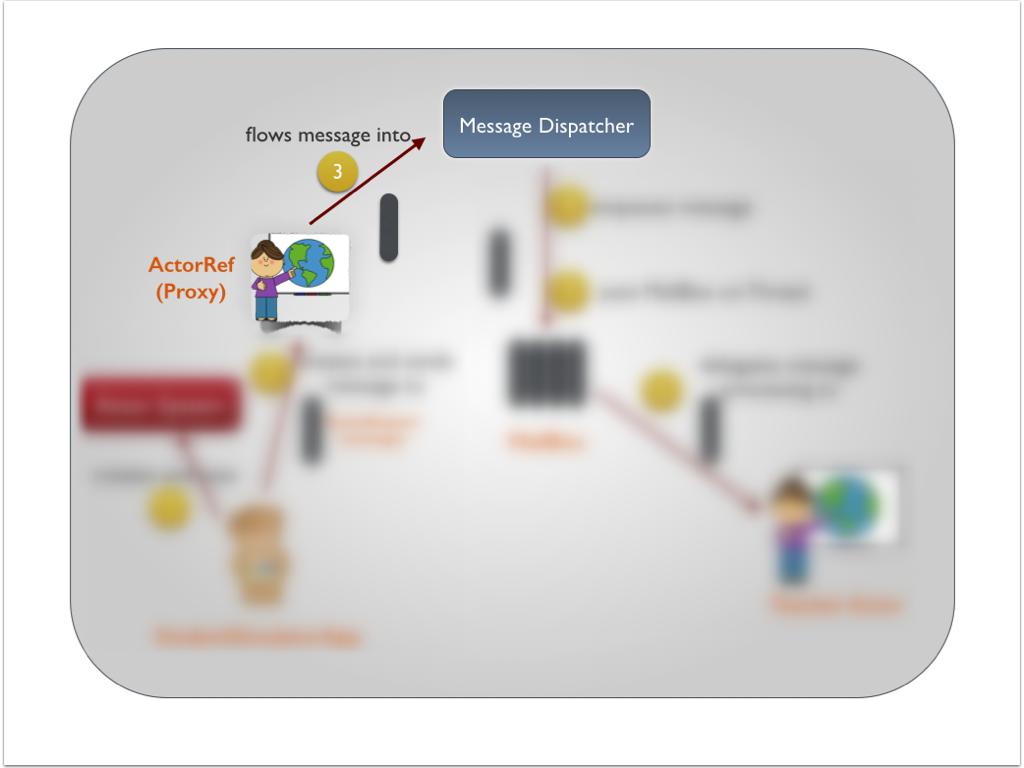 3. Send a QuoteRequest to the Proxy

If you think I am lying, check the entire code of the StudentSimulatorApp below :

Well, I cheated a little. You'll have to shutdown the ActorSystem or otherwise, the JVM keeps running forever. And I am making the main thread sleep for a little while just to give the TeacherActor to finish off its task. I know this sounds stupid. Don't worry about it. We'll write some neat testcases in the next part in order to avoid this hack.

We just told a QuoteRequest to the ActorRef but we didn't see the message class at all !!

As you know, the QuoteRequest is for the requests that come to the TeacherActor. The Actor would respond back with a QuoteResponse.

Dispatcher and a MailBox

The ActorRef delegates the message handling functionality to the Dispatcher. Under the hood, while we created the ActorSystem and the ActorRef, a Dispatcher and a MailBox was created. Let's see what they are about. 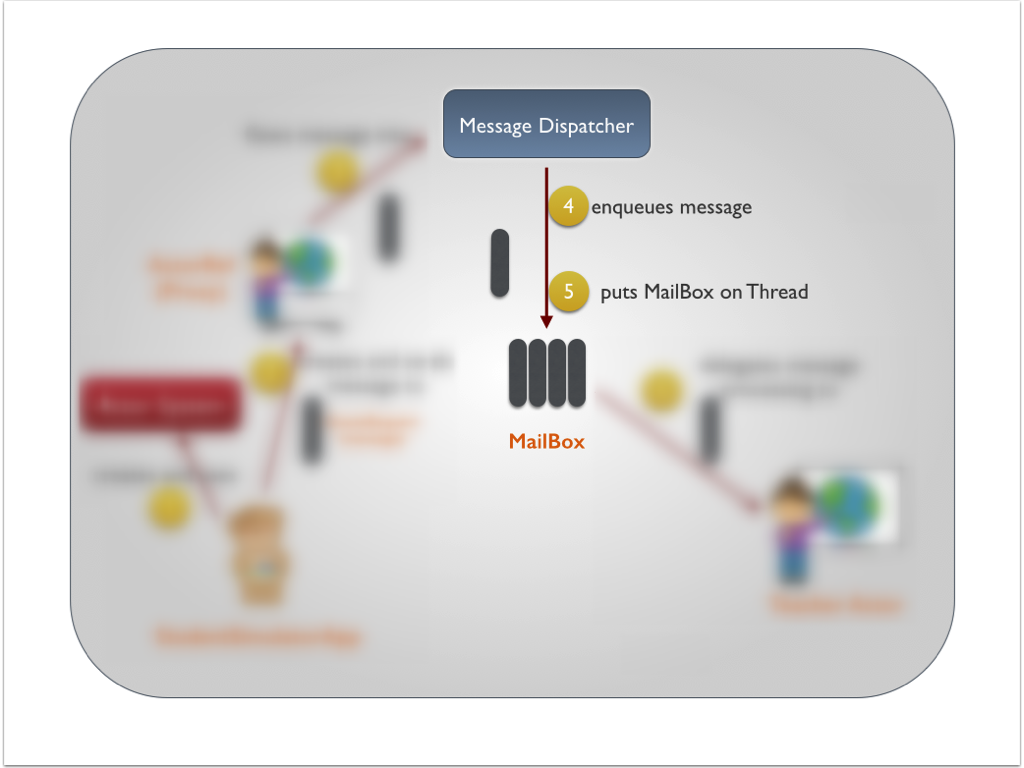 Every Actor has one MailBox (we'll see one special case later). Per our analogy, every Teacher has one mailbox too. The Teacher has to check the mailbox and process the message. In Actor world, it's the other way round - the mailbox, when it gets a chance uses the Actor to accomplish its work.

Also the mailbox has a queue to store and process the messages in a FIFO fashion - a little different from our regular inbox where the most latest is the one at the top.

Dispatcher does some really cool stuff. From the looks of it, the Dispatcher just gets the message from the ActorRef and passes it on to the MailBox. But there's one amazing thing happening behind the scenes :

Check out this snippet from the Dispatcher

What? Did you just say you execute the MailBox?

Yup. We already saw that the MailBox holds all the messages in a Queue. Also since the Executor runs the MailBox, the MailBox must be a Thread. You're right. That's pretty much MailBox's declaration and constructor.

Here's the signature of the Mailbox 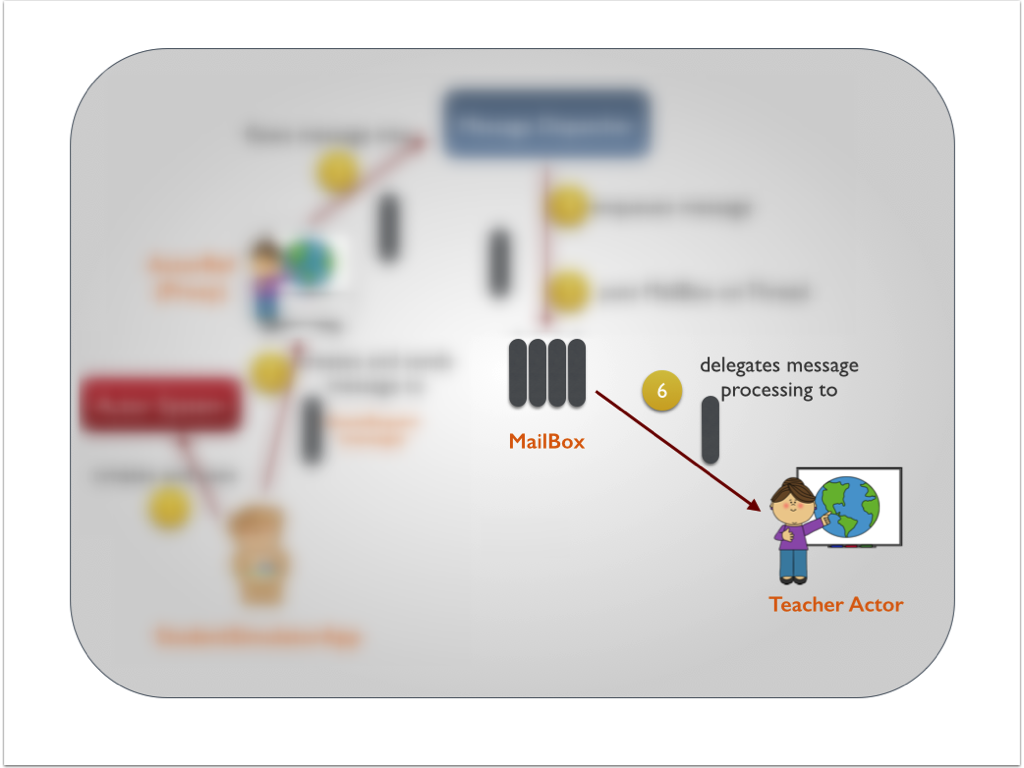 The MailBox, when it gets its run method fired, dequeues a message from the message queue and passes it to the Actor for processing.

The method that eventually gets called when you tell a message to an ActorRef is the receive method of the target Actor.

The TeacherActor is a rudimentary class which has a List of quotes and obviously the receive method which handles the messages.

The TeacherActor's receive method pattern matches for just one Message - the QuoteRequest (actually, it is a good practice to pattern match the default case but there's an interesting story to tell there)

All that the receive method does is to

The entire project could be downloaded from github here.

We expand this example to Logging and Testing in here.