Anyone who has done multithreading in the past won't deny how hard and painful it is to manage multithreaded applications. I said manage because it starts out simple and it became a whole lot of fun once you start seeing performance improvements. However, it aches when you see that you don't have a easier way to recover from errors in your sub-tasks OR those zombie bugs that you find hard to reproduce OR when your profiler shows that your threads are spending a lot of time blocking wastefully before writing to a shared state.

I prefer not to talk about how Java concurrency API and their collections made it better and easier because I am sure if you are here, you probably needed more control over the sub-tasks or simply because you don't like to write locks and synchronized blocks and would prefer a higher level of abstraction.

In this series of Akka Notes, we would go through simple Akka examples to explore the various features that we have in the toolkit.

Treat Actors like People. People who don't talk to each other in person. They just talk through mails.

Let's expand on that a bit.

That pretty much sums up the basic block of the Actor Model - passing messages. 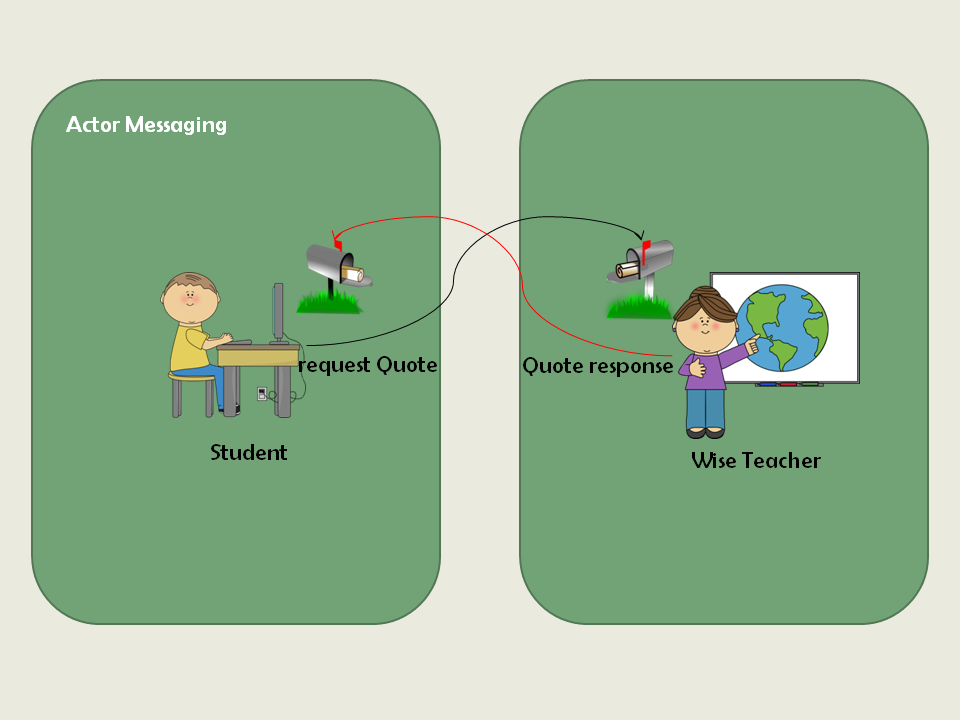 Now, imagine there are 3 wise teachers and 3 students - every student sends notes to every other teacher. What happens then? Nothing changes actually. Everybody has their own mailbox. One subtle point to note here is this :

By default, Mails in the mailbox are read/processed in the order they arrived.

Internally, by default it is a ConcurrentLinkedQueue. And since nobody waits for the mail to be picked up, it is simply a non-blocking message. (There are a variety of built-in mailboxes including bounded and priority based. In fact, we could build one ourself too) 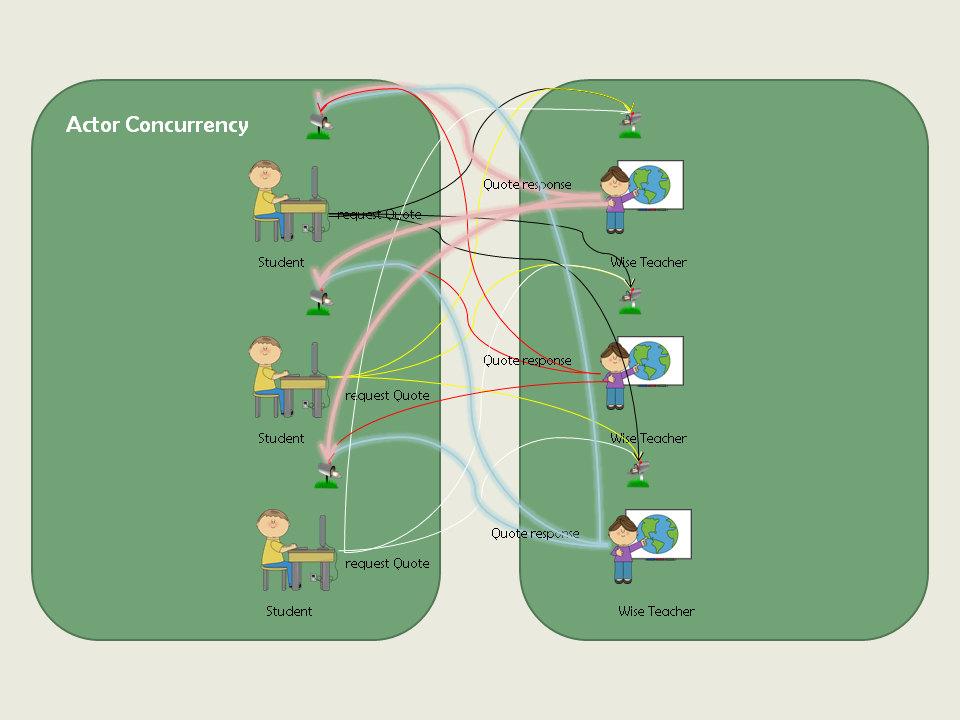 Imagine these 3 teachers are from three different departments - History, Geography and Philosophy. 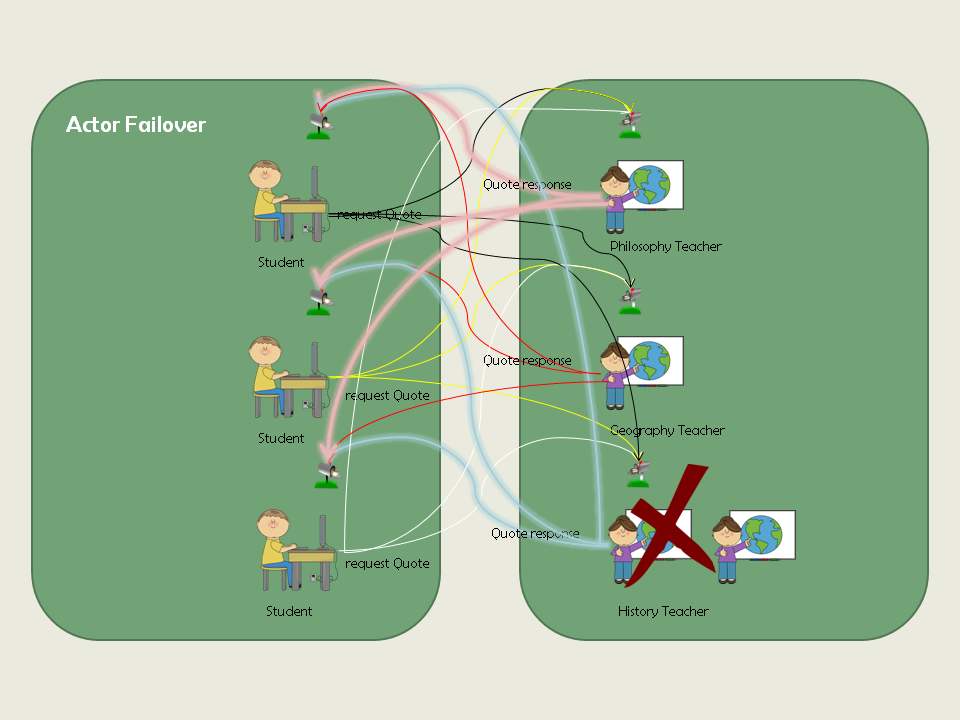 For a twist, let's assume that each of these teachers also send the exam score through mail too, if the student asks for it. Similarly, an the Actor could handle more than one type of message comfortably.

What if the student would like to get only one final consolidated trivia mail instead of three?

As requested by Mohan, let's just try to map the analogy components with the the components in the Actor Model. 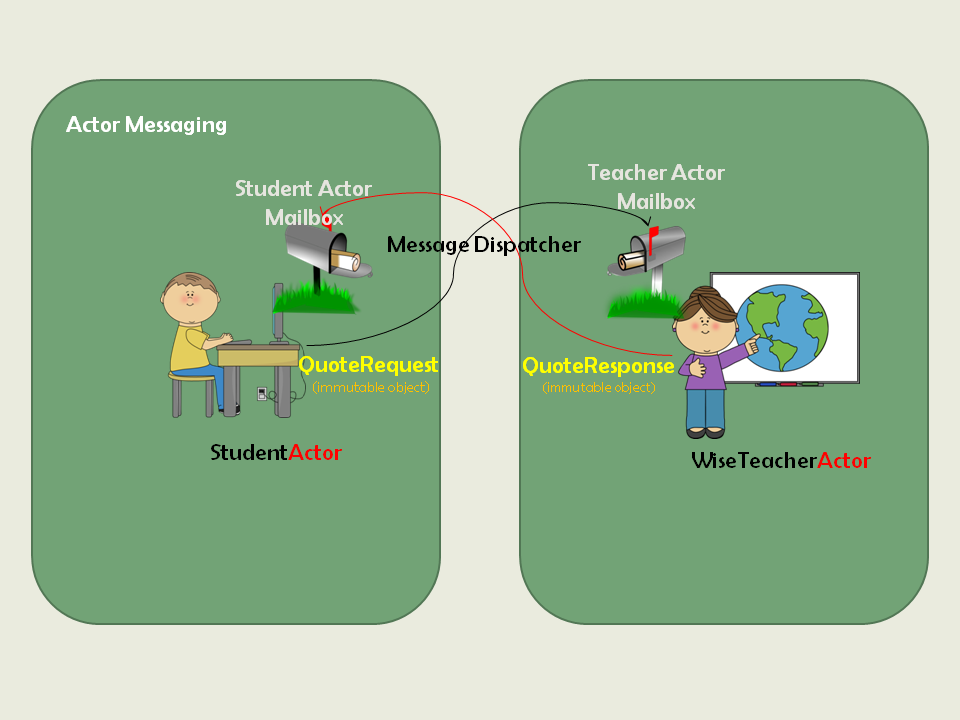 Students and the Teachers becomes our Actors. The Email Inbox becomes the Mailbox component. The request and the response can't be modified. They are immutable objects. Finally, the MessageDispatcher component in Actor manages the mailbox and routes the messages to the respective Mailbox.